God of War Ragnarök begins exactly as expected. So we find Kratos and Atreus, a little older, still in conflict with the gods of Nordic mythology, starting with Freya, who does not forgive them the fate reserved for her son Baldur. In this unfortunate context, Atreus convinces his father to find Tyr, an ancient god, the only one who can win against Odin in the final battle of Ragnarök. Of course, this is only the starting point of a larger odyssey, but we will return to it later. So the first hours look like a giant tutorial where we re-learn the basics of the gameplay, a little surprised that Kratos and Atreus lost all their equipment and powers. The game gives a reason for this situation, but it’s still light, and it might make you smile a little slyly…

Very quickly, some novelties appeared, such as the new use of Chaos blades. The chains of the latter are now used as a “grab” to quickly go up or down along the walls, or to swing the attachment points. They also allow you to grab decorative elements (stone pillars, etc.) and move them, thus unblocking a path. We also discovered the possibility of freezing the ax or burning the blades, which at first served more to solve some puzzles (the famous frozen water geyser seen in the trailer) than to fight. And that’s about it. So the first 5/6 hours happen without any real surprises, and above all in the model of the first period. The construction is very similar, as are the environments visited. The game begins in the kingdom of Midgard, certainly changed in the form of a harsh winter, but we already know. The second area revealed is new, but you are immediately locked into settings that are also close to the first part (you’ll understand). In this episode of the adventure, the ghost of “God of War 1.5” expands its disturbing shadow… And then, suddenly the game is taken, finally showing what is really in its belly. From there, the climb never stops. 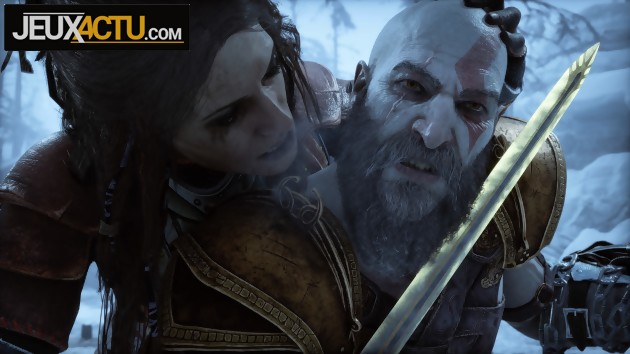 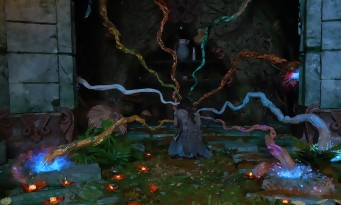 From the perspective of writing the script, the adventure suddenly returns, and the stakes and situations increase. We will not reveal the details here, but understand one thing: God of War Ragnarök not only tells the story of Kratos and his son Atreus, it is a real odyssey that immerses you in the heart of Norse mythology . Some characters from the first part take on a crazy and unquestionable thickness, while new faces also have an exciting, complex, anything but Manichaean destiny. And all this takes a crazy measure of hours, which makes each new encounter important, each new place uniquely attractive. In terms of gameplay, things also improve after the prologue. We discovered new ways to use the axe, whether for combat or exploration, but also to invent mechanics based on chain reactions, for example. The most interesting thing is that some skills are specific to a kingdom, and cannot be found elsewhere, thus avoiding the trap of repeating ad nauseam. 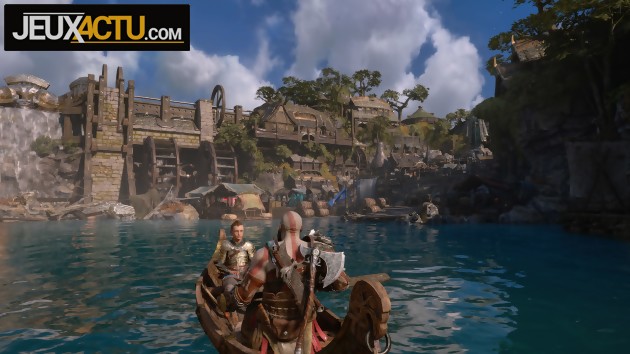 Likewise, the innovations seen at the start of the game (such as the grapple function of chaos blades) finally make their full sense. The ability to cross sets very quickly is sure to encourage exploration. In combat, grappling hooks also increase verticality, with the need to move quickly from one “floor” to another decoration to track down enemies, or simply to provide a brief rest. The interaction with your environment is also more advanced, with the possibility to grab and throw your enemies trees, rocks, columns, etc. You can also destroy some elements, for example to get rid of the monsters that are clinging to the top. All this gives a crazy potato to the battles, which turn into a truly deadly choreography where you change weapons and techniques on the fly, depending on the situation. For those who have a good command of all available methods, this is a treat. A little flat, however: as in the first stage, blows with fists, feet and shields remain the most effective to quickly call opponents, to get them (with R3) to hit them a fatal that blow. So we are tempted to abuse these techniques, which sometimes make the fights repeated. However, the game has a “parade” of this behavior, with the presence of some “protected” enemies, against whom it is necessary to use fire or ice. However, in any case, due to the intensity of the fight, we were forced to give everything we had. But remember all the same effectiveness of strikes with no hands, it can be useful … 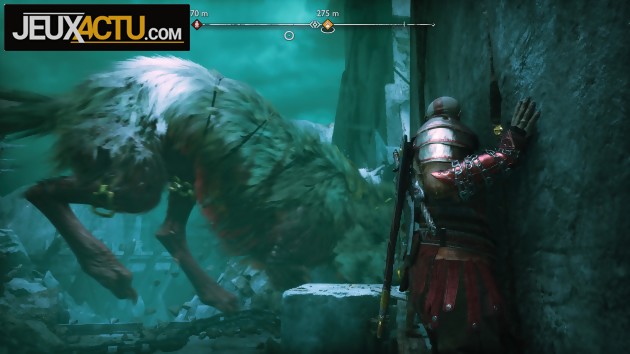 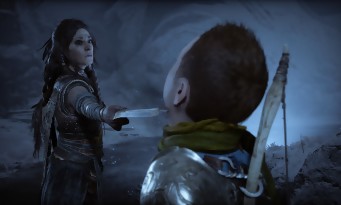 Let’s talk bestiary. The first part was criticized for the lack of diversity, especially the trolls. Again, the God of Ragnarök is concerned with the first hours of play, with new monsters, but it is always a feeling that some will always return. Fortunately, things improved after that, with a pharaonic number of new enemies, and the return of the best creatures from the first episode. But more importantly, this sequel finally offers boss fights worthy of the names. Do you remember the big dragon in the first opus? Know that this is nothing compared to the many monsters you will encounter, either during the course of the adventure or in the side quests. It is also strongly advised to go off the beaten path, to provide services to the inhabitants of the kingdoms, because your helpfulness will be rewarded. Some secondary missions open up entire sections of each map, where you’ll find more puzzles to solve, items or treasures to collect. Thus we can spend hours “losing ourselves” in the kingdoms, to fulfill these quests, which are definitely annexes, but very well written in general (sometimes even with a little morality at stake). It’s also a great way to level up your characters, to find new equipment. The RPG aspect more or less takes the elements of the first part, with skills to unlock, runes to install on your weapons to get special powers, charms to improve your statistics, etc. In terms of novelties, we notice the appearance of “powers” for the shield, or the possibility of changing some skills. In general, there is nothing extraordinary, but on the other hand expect many skills to be unlocked … However, on closer inspection, some are more attractive than others, so we are tempted to keep them in whole adventure. 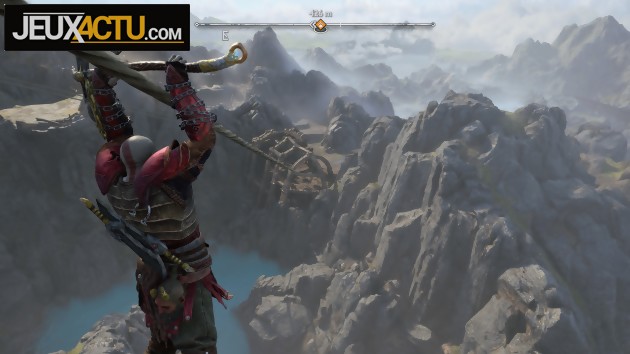 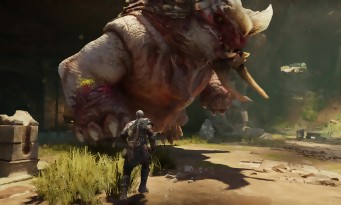 Visually, God of War Ragnarök is consistent with its predecessor. The game should run on PS4 and PS5, the technical gap is not big, but the graphics are as attractive as ever. Above all, the decorations have become more diverse and organic. Thus you can cross forests, deserts, snowy expanses, and also many highly detailed interiors. Life is more present, with more animals watching over you or wandering here and there. In a way, the climate of each area can be seen, and a change of scenery is guaranteed. True, we still found many places that were already visited in the first part, but they have completely changed in appearance, such as the famous lake of 9, now frozen, which we explored on board a sled. Battles are also an opportunity for beautiful visual effects that fill the screen, all without the slightest slowdown. But it is mainly in terms of the game that this God of War Ragnarök impresses, with truly realistic facial expressions, which perfectly transcribe the emotions of the characters, and clearly contribute to the credibility of scenes. Some fights, especially against bosses, also put a pie, as the camera rotates to emphasize the brutality of the battles.

Above all, the decorations have become more diverse and organic. Thus you can cross forests, deserts, snowy expanses, and also many highly detailed interiors. Life is more present, with more animals watching over you or wandering here and there. 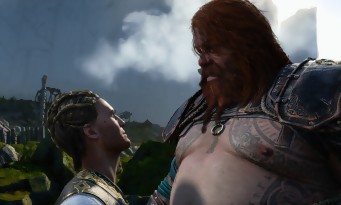 The brutal kills are amazing too, with some seriously awesome new animations. And like its predecessor, God of War Ragnarök takes place entirely in one continuous shot, without cutting, which is a real feat given the construction of the script. In short, it is an excellent visual work, supported by an epic soundtrack and convincing French dubbing, although the subtitled original version remains more accomplished (a matter of taste). As for DualSense, haptic feedback is demanded everywhere, but shines especially when it comes to transcribing the feeling of leaving the water when paddling. Resistance to strong feedback triggers is not excessive, perhaps to avoid fatigue of the fingers, because we spend our time pressing these buttons on the slice. There is not much to tease the game at the technical level therefore, if not a lack of ergonomics in the menus, always a little confused and overloaded, in the same way as the map, not always readable. The turn command (very important in combat) is also assigned to two impractical and instinctive key combinations. And even if you can deport the flip-flop to the touchpad, it’s not a panacea either. Finally, note the presence of some bugs in this test version, some anecdotal (missing sounds), others more restrictive (scripts not starting) and which require some re- restart the game. first day