No less than 250 people were invited. The eco-organization Soren and the social and solidarity economy company, Envie 2E Aquitaine, saw things big for the inauguration of the photovoltaic module recycling center, this Tuesday, September 27, in Saint-Loubès in Gironde. I have to say that “This new plant is unique in Europe and new on two levels”, insisted Frédéric Seguin, general manager of Envie 2E Aquitaine in charge of the panel processing center in the context of a call for tenders launched by Soren. Unlike factories that recycle panels by grinding, the one in Saint-Loubès, which will be commissioned in a month, will use a hot blade removal process. The site also has the first line of reuse and recycling in Europe.

5% of panels returned to service

“Our first credo at Envie is to extend the life of devices”, Frédéric Seguin recalled. So the processing center has a test line here to check a panel at the end of its life but still in good condition. The first step allows to determine the general condition of the panel. If it doesn’t pass, send it for dismantling. If not, it goes to the flash test stage which shows the power curve of the panel. “According to a threshold that remains defined, the panel can be returned to sales”, explained Frédéric Seguin. Reuse should be concerned with around 5% of the panels treated in Saint-Loubès.

Those that cannot be reused leave, for their part, the other two circuits. The broken panels are sent to an Envie partner while the rest go through the Saint-Loubès delaminator, this famous machine recently imported from Japan that allows the photovoltaic panel to be cut and the glass plate to be is below obtainable intact. .inside.

“This glass plate can be reused for making windows in particular. We are working on the specifications of Saint-Gobain”, said Frédéric Seguin. But other extracted materials can be reused, namely silver, silicon, copper and aluminum. “It’s the whole photovoltaic sector that’s leading here”assured Frédéric Seguin. 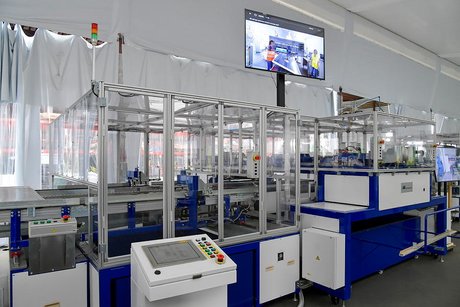 Same enthusiasm on the side of Nicolas Defrenne, general manager of the Soren eco-organization approved by public authorities for the collection and treatment of panels in France and owned by eight entities (companies, unions, associations) . He highlighted an installation that was in line with Soren’s vision:

“We are inaugurating a processing unit that will finally allow us to work with 100% recovery of future value. Let me explain: now, with grinding, we cannot recover much silicon and silver. especially representing 60% of the future material value of a new panel. Money, which is necessary for the ecological transition, is 0.08% of the weight of the panel and 20% of its value . I think, in terms of I am concerned that we will move from the age of oil to the age of metals, and with this unit we will enter this new paradigm.International Energy Agency shows that by 2050, 80% of the money needed for the energy transition can be provided by recycling. But it will be true if we put units like the one in Saint-Loubès into service with high added value!

Although the Saint-Loubès plant was first, Nicolas Defrenne considered placing units of this type in other regions. Because if 20,000 tons of used photovoltaic panels have been collected since 2015, “it is a joke compared to the expected volumes”, according to Xavier Daval, president of the solar commission of the Union of renewable energies. “It is estimated that 1.245 million tons of panels are currently installed in the national territory. 150,000 tons of panels should be treated by 2030”did he declare.

Meanwhile, two million euros have been invested in the Saint-Loubès treatment plant, financed mainly by Envie with loans and equity, assisted by the Nouvelle-Aquitaine Region to the tune of 400,000 euros, Ademe (100,000 euros) and the State ( 100,000 euros).

This center has the particularity of employing 25 people, including 24 women, and among them women of integration. “We give priority to women who in the process of integration are always offered positions in the home. Here, a panel weighs 18 kilos but lifting equipment is installed”assured Frédéric Seguin. 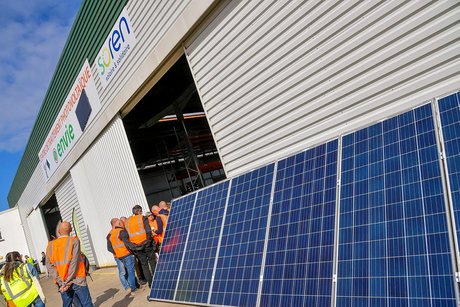 The Saint-Loubès site is the third major photovoltaic panel recycling center built in France after Haluin (Nord), still operational, and Rousset (Bouches-du-Rhône), launched by Veolia in 2018 and closed a few years ago has passed. .