CLIMATE – “Extraordinary” and very worrying. The Mediterranean Sea is breaking heat records this summer. This Sunday, July 24, the water temperature “almost reaches 30 ° C in (as on July 22) the buoy on the east coast of Corsica”, warned Keraunos, the Observatory French tornado and severe thunderstorms. An increase in temperature has already disturbed the ecosystem of the Mediterranean, with the proliferation of jellyfish.

“The thermal anomaly in the western Mediterranean is extraordinary, sometimes higher than 5 ° C on the coast of Provence”, explains the Observatory, while many departments of the Mediterranean coast are still put on alert for a heat wave on Monday.

The sea temperature is about to reach 30°C (as of 22/7) at the buoy on the east coast of #Corsica (Alistair).
Thermal anomalies in the western Mediterranean are rare, sometimes > 5°C on the coast of Provence. #heat wavepic.twitter.com/DJ6YvplzNa

Sea surface temperatures (SST) will rise +5°C above average along the coasts of Spain, France and Italy, as seen in the visualization below based on data from the Copernicus Marine Service. “Except for the Alboran Sea (between Morocco and Spain), the entire western Mediterranean has experienced a marine heat wave since May 16”, detailed Robert Schlegel, researcher at the Institut de la Mer de Villefranche (IMEV), who was interviewed at the end of June by The HuffPost. 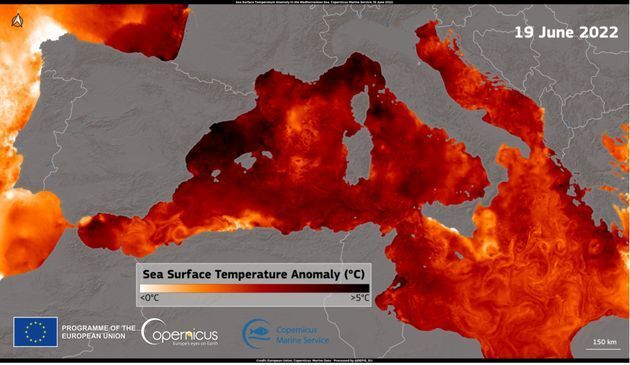 Some parts of the Mediterranean are more than +5°C warmer than average.

Bad news that could get worse. “We are stuck in a situation where, by 2050, the world’s oceans will be in an almost constant state of marine heat waves”, warns Robert Schlegel. In the current climate, ocean heat waves only last a week in the Mediterranean. In the worst scenario predicted by the IPCC, with a warming of +5 ° C, the simulations predict that they will be four months longer and four times worse, reports a CNRS study on evolution in the heat waves of the Mediterranean sea.

“Between 1925 and 2016, the number of annual days of marine heat waves in the world increased by more than 50%”, reports Carole Saout-Grit, physicist oceanographer, contacted by The HuffPost. These numbers come from a study in the scientific journal Nature Climate Change where researchers have established a direct link between the increase in these heat waves and the long-term warming of the oceans.

Even if we manage to prevent warming of +2 ° C, “almost all oceans will experience more frequent and longer ocean heat waves”, the researcher continues. As for the consequences, the past ocean heat waves predict major changes in ecosystems, in fauna and flora. In 1999, 2003 and 2006, the Mediterranean was hit by a heat wave that caused “many cases of mass death of species”, lamented the National Center for Scientific Research (CNRS).

New oxygen-free zones have appeared in recent years in the Indian Ocean and the Pacific, and hypoxic vortices have recently been discovered east of the Atlantic. The condition of hypoxia occurs when the amount of oxygen in the sea water is not enough and can no longer meet the needs of the marine fauna that need this oxygen.

An influx of tiny purple jellyfish in the Mediterranean

Another consequence of warming temperatures in the Mediterranean, Pelagia noctiluca, a small purple jellyfish, has been washed up by the dozens along the beaches. “These stages of proliferation are not new, and even described in antiquity,” explained the HuffPost Mélanie Ourgaud, oceanographer, marine biologist and CNRS researcher. But global warming is not the only reason for this increase.

“For the Pelagia noctiluca-type jellyfish, ocean currents play a major role,” added the scientist. They belong to the plankton family, so they cannot swim, and like all members of this family, they are carried by ocean currents.

It also evokes another factor, again human: overfishing. “Stocks of top predators (turtles, tuna, etc.) are not enough to eat the squib, as well as stocks of zooplanktivores (sardines, anchovies, other small blue fish) that eat zooplankton (the same source of food for syakya) decreased. The scarcity of fish is a favorable factor for the development of the boat” lamented Mélanie Ourgaud. It is clear that this proliferation of boats confirms the state of health of our oceans and shows the threats to the marine environment.

See also at The HuffPost: These pictures of the largest salt lake in the United States, dried up, are chilling